At Dr. Mabrie’s practice in San Francisco, brow lift is often a non-surgical procedure achieved with BOTOX® injections. However, there are several surgical methods to elevate the eyebrows to a youthful, attractive position.Four of the more commonly used brow lift procedures are the temporal, endoscopic, trichophytic, andcoronal brow lifts. Each method has particular advantages and disadvantages, but Dr. Mabrie prefers the non-surgical chemical approach (BOTOX®), or the temporal, minimally invasive surgical approach. He will choose the method based on your particular anatomy and aesthetic desires, and if you are a candidate for one of the more extensive brow lift procedures, he will refer you to another specialist.

To learn more about your options for brow lift (or forehead lift) in San Francisco, you can view our Brow Lift Overview page. For information that is specific to you and for a individualized treatment plan, request a consultation online or call us at (415) 445-9513.

BOTOX Cosmetic may be used to elevate the eyebrows non-surgically. BOTOX Cosmetic is placed in the muscles which depress the eyebrows. These muscles are temporarily relaxed, allowing the eyebrows to elevate 1 to 2mm. The elevation will last 3 to 4 months. This is a good option for brow lift patients desiring cosmetic improvement without a surgical procedure. 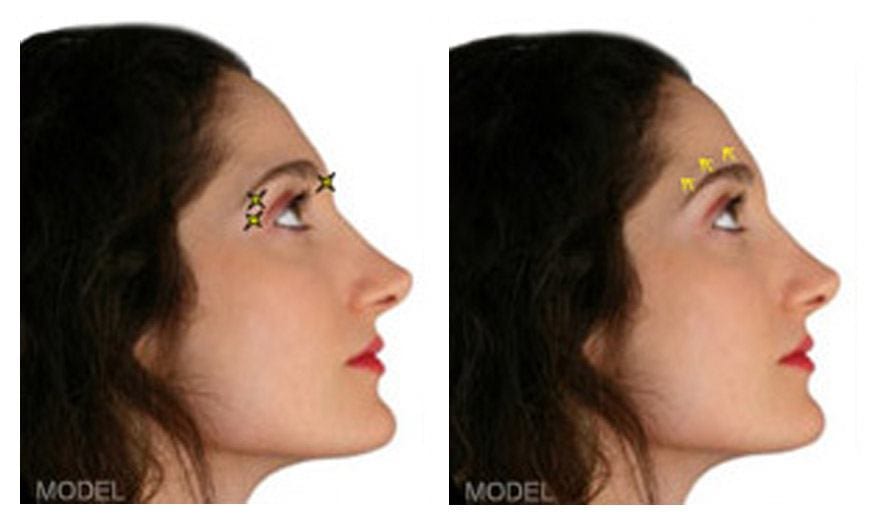 The temporal brow lift is a procedure in which smaller incisions are made in the temple region of the forehead and scalp.Most of the incision is hidden in the scalp with a small portion placed on the side of the forehead.This approach has the advantage of being a smaller procedure requiring less dissection.The disadvantages are that the results last only 3 to 4 years, only the outer portion of the browis elevated, and the part of the eyebrows close to the nose is not elevated.There may be a small scar on the side of the forehead.This approach is an option in older patients with deep forehead wrinkles who wish to avoid the extensive dissection of a coronal or trichophytic brow lift. 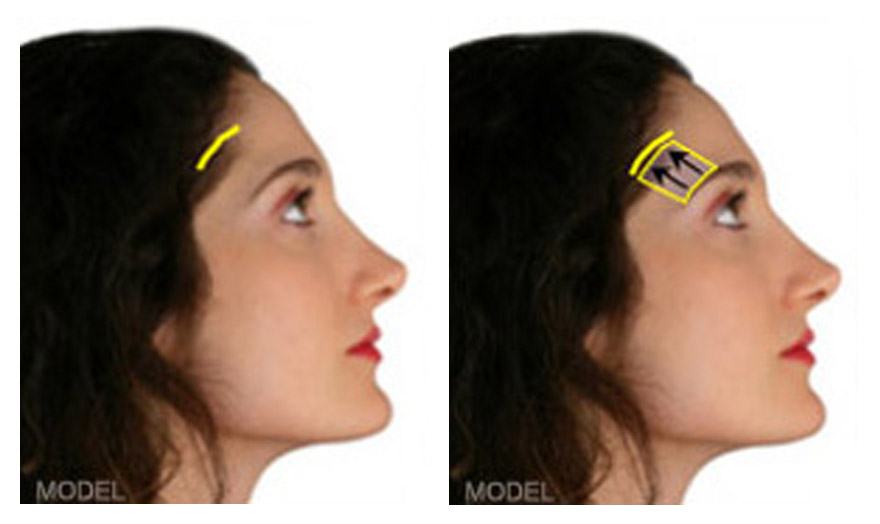 Incision is placed on the side of forehead, predominantly within hair-bearing scalp. Some of incision may extend to non-hair-bearing skin. This technique elevates the outer portion of the eyebrow.

The endoscopic brow lift is a procedure elevating the brow without excising any skin.Several small incisions are made behind the hairline, the skin of the forehead is repositioned and secured in an elevated position using an endoscope and specialized instruments. This approach has the advantage of small incisions hidden in the scalp. Disadvantages include the elevation of the hairline and the transient nature of the results (which is usually 1 to 3 years). This procedure is a good option for patients in their mid to late 30’s with minimal brow ptosis. 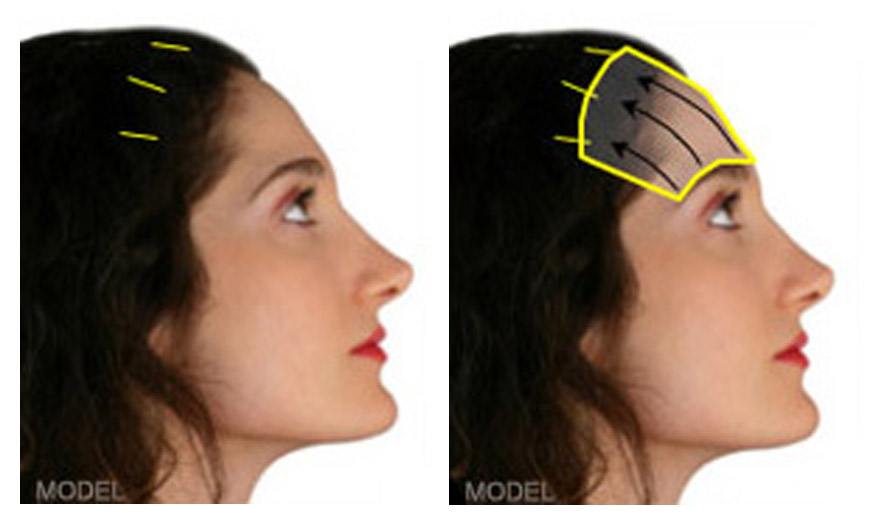 Multiple small incisions are placed behind the hair line. Little or no skin is excised. The brows and forehead skin are elevated using endoscopes and endoscopic instrumentation. After elevation, the forehead skin is stabilized in an elevated position.

The trichophytic, or hairline brow lift is a modification of the coronal lift in which the incision is placed directly in the hairline in a wavy fashion, camouflaging the incision.Skin is removed from the non-hair-bearing portion of the forehead.The brows are elevated while the hairline is not.The approach shares the long lasting results of the coronal lift and does not raise the hairline. However, it is not as advantageous in men who have a high likelihood of male pattern hair loss, as this may eventually reveal the scar. 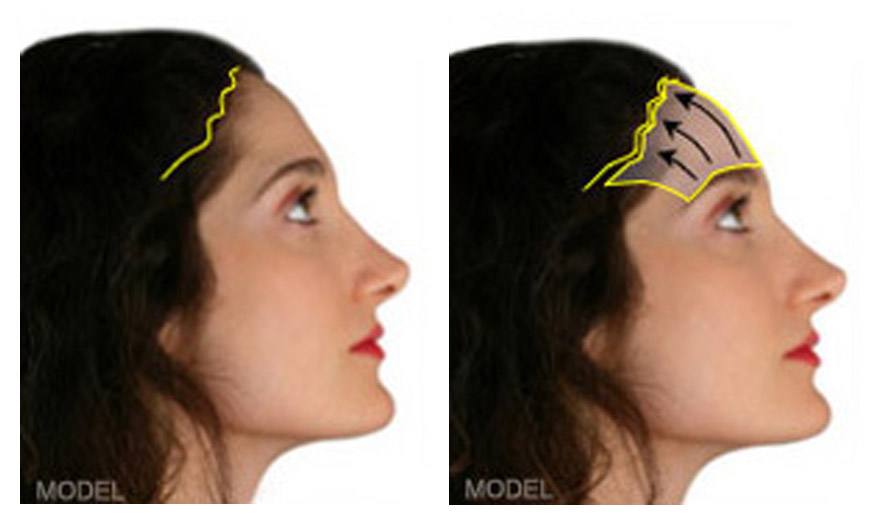 Incision is placed within the hairline. This technique elevates the eyebrows, and smoothes the forehead. The hairline is not elevated. 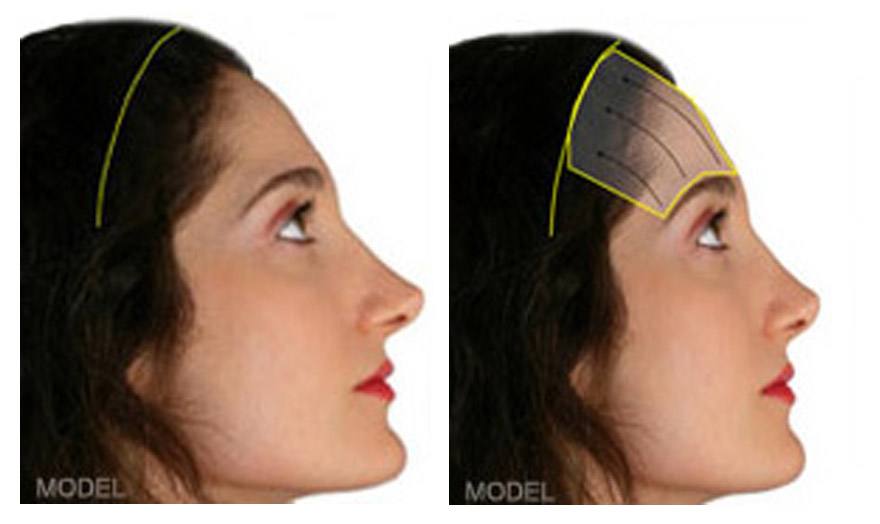 Incision is placed behind the hairline. This technique elevates the eyebrows, smoothes the forehead, and elevates the hairline about half an inch.
Back to Top
COVID-19 UPDATE: Click for the latest news from our office!
Contact